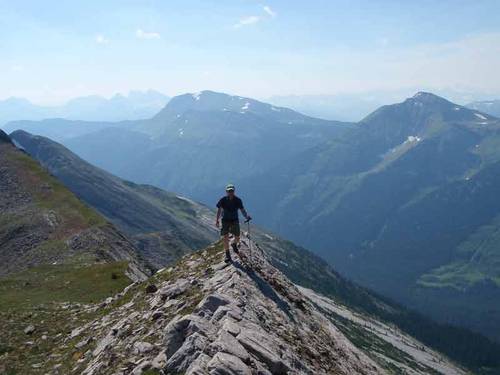 Situated 50 kilometres south of Salzburg, in the so-called “Inner Mountains”, the Geopark covers 211 km2 and belongs to the communities of Bischofshofen, St. Veit, Hüttau and Mühlbach at Hochkönig. The human history of this region goes back to the Copper and Bronze-Age, and is closely linked with the area’s mineral resources, specially iron ore and gold. Ore of the Alps is mainly situated in theGraywacke Zone, consisting of clastic rocks about 541 to 252 million years old that arerich in mineral deposits. The northern fringe belongs to the Northern Calcareous Alps, the southern one to the Central Alps. The site is characterised by carbonate cliffs, waterfalls, gorges, springs, rock fall terraces, cirque lakes, and roche mountonées. The plateau of the highest peak in the Geopark, the Hochkönig (2,941 m), is covered by a glacier.

Tumbler Ridge Global Geopark is notable for its remote, wilderness location. It is the first Global Geopark in western North America, and the first to represent the plate tectonics that led to the formation of the Rocky Mountains. Mountain and foothill geology spans a Precambrian to Cretaceous time range (4600 to 66 million years ago).  The site also contains Pleistocene deposits (2,588,000 to 11,700 years ago), and preserves part of the Triassic Pangea shoreline (about 250 to 200 million years ago) as well as the interchanging marine and terrestrial intervals of a fluctuating Western Interior Seaway. This is complemented by an abundance of palaeontological phenomena, which form the basis for ongoing scientific research. Cretaceous dinosaur tracks (many of which are of global significance), a Cretaceous dinosaur bone bed with unusual features, and Triassic fish and marine reptiles are of particular importance.  The Dinosaur Discovery Gallery in Tumbler Ridge is a major attraction, while a network of hiking trails leads to numerous geosites, including spectacular waterfalls, dinosaur tracks, mountain summits, sedimentary rock formations, caves and canyons.

Mount Kunlun Global Geopark is 90 km from Golmud City in Qinghai Province It covers an area of 1,403 km2 with an elevation of 3,540 to 6,178.6 m and consists of three scenic areas, including Naij Tal, Xidatan and Jade Pool. The Geopark is endowed with abundant geological relics providing evidence of complicated crustal movements and ocean-land conversions. The 2001, 8.1 magnitude earthquake at Mount Kunlun – China’s most powerful earthquake in six decades  -caused a 426 km fracture zone, described as “nature’s classroom” by researchers. With magnificent glacier and permafrost landforms, the Geopark is an ideal place for research on landscapes. It was one of the areas from where human beings began  to explore the Qinghai-Tibet Plateau. The Qinghai-Tibet Railway, the world’s highest, with the longest section built on permafrost, runs across the Geopark. Mount Kunlun, known as “the ancestor of mountains”, holds a special place in Chinese mythology and culture.

Located in western Yunnan Province at the southern end of the lofty Qinghai-Tibet Plateau,  Mt Cangshan is a young mountain formed only 50 million years ago.  But the rocks that make up the mountain are more than 2 billion years old. Mt Cangshan is mainly composed of of metamorphic rocks, including marble renowned for its beautiful colour and structure. It  is the southernmost mountain in Asia reached by the latest glaciation period and many glacial landforms are well preserved and displayed. Mt Cangshan is a sacred mountain and displays unusual natural beauty.  The unique and colourful traditions of the Bai indigenous people have helped make the site a popular tourist destination.

The Odsherred Peninsula landscape, situated about 100 kilometres from Copenhagen,  was formed only 17,000 years ago during the latter part of the Weichselian era. The Odsherred arches are key localities  to understanding the principles of glacial landscape formations from this period. They are also a classic geomorphological example of glacial depressions, end moraines and melt-water flood plains. The glacial series of Odsherred, with its variety of distinct shapes, is surrounded by the sea to the east, north and west. The Geopark also features active, ongoing postglacial coastal processes like lagoon formation, bogs, and sand migration. Today, the area is a leading Danish holiday destination.

Monts d’Ardèche is France’s fifth Global Geopark and the first one outside the Alps. It is located on the eastern edge of the Massif Central at the interface between the Rhône valley and the uplands of the Massif. It covers 2,200 square kilometers of low mountains with steep slopes. Landcapes are marked by dry-stone terraces and cultivated chestnut trees. The Monts d’Ardèche are representative of the long-term geological and geomorphological history of South-Eastern France. The Earth history visible in the Geopark dates back to the constitution of the Variscan Chain, some 500 million years ago and includes marine and reef episodes. . But  volcanism is the  major feature here, and the Geopark includes two distinct and major sets of volcanism-issued landscapes: the “Sucs” (Miocene 23 to 5.3 million years ago) and the so-called “Ardèche young volcanoes” (Pleistocene 126,000 to 11,000 years ago).

Aso Global Geopark is located in the centre of Kyushu, the south east island of Japan. The Geopark possesses a giant caldera (18km East-West, 25km South-North) formed by four super eruptions about 270,000 to 90,000 years ago, central cones and an active crater. The Aso volcano was the centre of an ancient volcano-related religion and some of its folk traditions continue today. About 50,000 people live inside the caldera. Stabilised infrastructure and controlled monitoring systems for volcanic activity allow visitors to explore the area and observe the caldera topography easily. The major part of the Geopark lies within Aso Kuju National Park, the first Japanese National Park designated in 1934. Remains of Stone Age settlements about 30,000 years ago have been found on the peaks surrounding the caldera.

M’Goun Geopark is located in the middle of the Central High Atlas mountains in Morocco. The Central High Atlas is the highest and largest of mountain ranges in the country. The geological heritage of the Geopark includes outstanding mineralogical and paleontological features, like abundant dinosaur trackways of theropods and  sauropodes, geomorphologic sites like the Jurassic limestone bridge Pont d’Imin Ifri, or waterfalls, and impressive conglomerate cliffs.

There is also ample evidence of human occupation since prehistoric times including  rock art  and artifacts.. Its rich cultural heritage, bears witness to the centuries-old presence of the Amazigh (Berber) people with typical traditional architecture and granaries.

Located in the Trás-os-Montes region in northern Portugal, the Terras de Cavaleiros Global Geopark covers an area of 700 km2. It includes geosites that document an important stage of the history of planet Earth, including a sequence of rocks from an old continent dating back more than 500 million years that overlapped rocks of oceanic crust. Furthermore sediments are found there that prove the existence of an ancient fluvial network that once drained into the interior of the Iberian Peninsula, as well as active faults, such as the Vilariça fault which crosses the whole territory of the Geopark. The cultural highlight of the area is the Careto religious ritual during the carnival feast, whichdates  back to prehistoric times, and is characterised by  diabolic and mysterious figures.

The Geopark covers the entire island of El Hierro, the smallest, westernmost and youngest of the Canary Islands archipelago, formed less than 1.12 million years. It is among the best representations of a single volcanic island and includes three authentic landscapes of major geological significance. Many volcanic features of scientific, scenic and educational interest, are distributed across the island including fault systems, tuff rings and maars, lava tubes, dykes, tree moulds, mineral water springs, fresh volcanic craters and associated recent lava flows, as well as landslide features, some in the form of arch-shaped mega-structures. The volcanic geology is clearly visible and facilitates study and tourism.

The Geopark is located in Castile – La Mancha region, in Guadalajara Province, about 200 km north-east of Madrid. Geographically, the region of Molina is part of the southern Iberian plateau between, the river Ebro to the north and the Tagus River to the south.. These rivers strongly marked the Geopark’s landscape, flora, fauna, and human settlement. The geological heritage interest of the Geopark is based on large continuous sedimentary series, ranging from the Ordovician to the present. They constitute a record of major events from the last 400 million years of Earth history. More than 20 sections of archetypical geological formations telling this story have been identified by scientists, with geological stratotypes and boundaries of international interest. The area has been inhabited since ancient times, and includes important samples of Palaeolithic rock art and Celtiberian fortresses that have provided valuable information about the Celtberian culture.